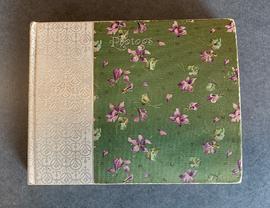 Hardcover photograph album. Single photographs inserted into a paper enclosure sleeve; each sleeve has an open viewing window that frames the image. Title quoted from handwritten text on the inside cover: "Snow Scenes around Breckenridge, Colo. Winter 1899". The front and back cover have a purple floral print on a green background. "Photos" is embossed in silver print on the front cover. The spine has a wide band with a silver embossed pattern on a cream background.