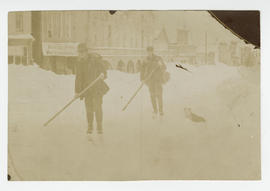 Mail carriers on Main Street during the Big Snow of 1899

Jess Oakley and Eli Fletcher carry the mail down Main Street, Breckenridge, Colorado during the "Big Snow" of 1898-1899. The men volunteered to ski over Boreas Pass to Como, where the Denver, South Park and Pacific (DSP&P) train had been stopped. From February 5 until April 24, heavy snowstorms prevented DSP&P from delivering mail, fresh food and other supplies to Breckenridge. Quoted from handwritten text on the reverse: "US mail via snow shoe winter of the 78 day blockade". Note: Possibly the sons of the widows who ran the boarding house on Ridge Street, called the Colorado House (as of 2015, Fatty's Restaurant). One of the boys was Justen G. "Jess" Oakley, son of Almeda Peabody Oakley. A contribution was collected for him in the amount of $12.00. 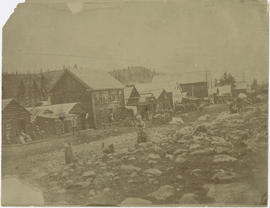 Breckenridge, Colorado, circa 1867. Log buildings and cabins line the west side of the rocky, dirt packed Main Street. The two story, side gable log building is the 1862-built Silverthorn Hotel. A covered horse-drawn carriage is stopped out front. More wagons pulled by horses or oxen crowd the street. In the foreground a young boy (possibly Eli Fletcher) sits on a tree stump. In view (far right) is a pump and trough for horses and oxen (removed in 1881). Elmer C. Peabody dedicated this typed manuscript to his granddaughters in 1952. In it, he shares his memories of the "Big Snow" of 1898-1899 as a fourteen year old boy living in Breckenridge. Of particular interest is Elmer's description of "snow bikes". Also, he tells about mail delivery and transportation by skis, low food supplies and Mrs. Kaiser's cow, and dances held at G.A.R. Hall and Fireman's Hall. Members of Improved Order of Red Men, Kiowa Tribe No. 6 pose for a group portrait